Oliver Tambo lived with his family in Muswell Hill for many years during his exile from South Africa during the apartheid years.

Here are some photographs of his bust in the park and a few words about him. I got up very early one November morning to get the most spectacular photos I could, just before and after the sun rose as the colour of the bronze changed from dull brown to shimmering gold; and then, in addition, I couldn't resist showing a very chilly Oliver in the snow.

November - a minute before sunrise 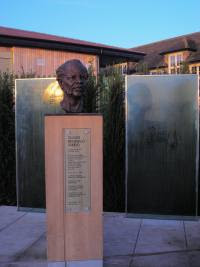 The minute of sunrise 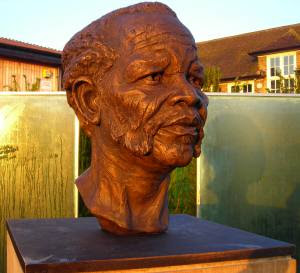 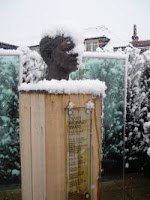 Oliver Tambo, co-founder of modern South Africa, was instrumental in bringing down the apartheid regime from a house in Muswell Hill, North London. He and his former home were recognised in October 2007, when his bust, by the late Ian Walters (who also sculpted the statue of Nelson Mandela in Parliament Square) was unveiled in Durnsford Road Park, and a blue commemoration plaque was placed on his old house.

The three-storey house on the corner of Alexandra Park Road was once, in effect, the home of a government in exile and the children of one of the 20th century’s greatest statesmen used to play in the nearby park where now there is a memorial site with the bust of Oliver Tambo, the co-founder of the modern South African state, who came to London penniless and unknown in 1960, with the police on his tail. His wife Adelaide and young children were smuggled out to join him. The family could not have afforded this large house had it not been for political sympathisers raising the money to provide what was in effect the unofficial London headquarters of the African National Congress.

Oliver Tambo and Nelson Mandela together led their people to freedom. While Mandela was in prison for 27 years for political offences under the old apartheid regime, Tambo was travelling the world as a head of a quasi government in exile. In Muswell Hill a lot of people had never heard of him, and he was remembered by many locally, if at all, as the quietly spoken husband of an NHS nurse who lived with her three children in the big house. Unknown to them, it was a house where the phone was tapped and which attracted many visits from those involved in the anti-apartheid movement.

Nelson Mandela, a fellow lawyer and activist, visited him briefly in 1962. At that time Mandela was unknown, but by the time of Mandela’s second visit just after his release from 27 years’ imprisonment, they were both world leaders.

Over the years Tambo lobbied for international recognition, establishing ANC missions which were shadow embassies for a future South Africa, in 27 countries. He also founded the military wing of the ANC. When the Portuguese empire came to an end in 1975 Tambo moved his guerrillas out of training camps in Tanzania and Zambia into Angola near the South African border as a warning that the ANC were prepared to use force unless the apartheid system was dismantled peacefully. By the mid 1980’s, governments across Europe were in contact with him. The British Thatcher government, however, still considered the ANC to be a terrorist organisation, but eventually at an unofficial meeting with Sir Geoffrey Howe, the foreign secretary, Tambo was able to convince Howe of his serious statesmanlike qualities.

In 1989 Tambo suffered a stroke and, seriously ill, he was warned not to overwork. He returned to South Africa for the ANC’S first legal national conference there, in July 1991 and was elected as its National Chairman, but he died less than two years later barely having time to enjoy the fruits of his hard thirty-year struggle for freedom from apartheid in South Africa
[The source of most of this information is an article by Andy McSmith in The Independent 15 October 2007]
Posted by Unknown at 00:20:00 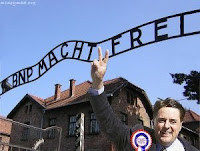