First I took a photograph of some beautiful red hollyhocks in my garden, and then I played around with the photo on Photoshop, adding swirls and whirls, until I created this design.

It would make a lovely present for a lovely lady, don't you think? ......Worth thinking about, anyway.

Actually, you can go on Zazzle and design your own items, from T-Shirts to posters, and everything you can think of in between, using your own pictures and designs - it's quite fun, once you've got the hang of it.
Do follow the link above, and have a look.

A fun page with Gothic #Halloween, #skulls and hearts, a Poll, posters,T-shirts and other products 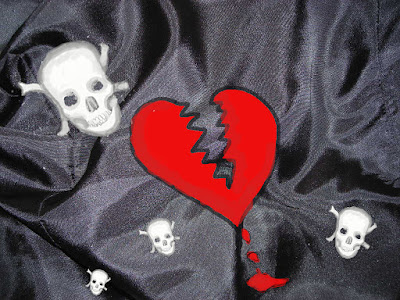 I used to have a little white skeleton dangling from a key-ring when I was a teenager, in the 1950s. I loved that skeleton, and even had a name for him - Skelly. I took him everywhere.

Of course, although I didn't know it at the time, that was the precursor of Gothic style as we know it today.
People thought I was ghoulish or just plain weird, a little girl carrying round horrid things like that. Not that I cared - I always liked to be different, and still do. I would be a bit sad if people thought of me as ordinary, or normal - not that I make a point nowadays of standing out in a crowd, but I don't necessarily conform to what other people think I should be, and prefer to choose what I think I should be.


I'd like to show you a great selection of Gothic style here - including Jewelry, Cards, and Artwork

Skulls are trendy this season. When they are connected with romantic hearts you have weird somewhat tongue-in-cheek symbolism, of the loving you to death or loving for eternity genre 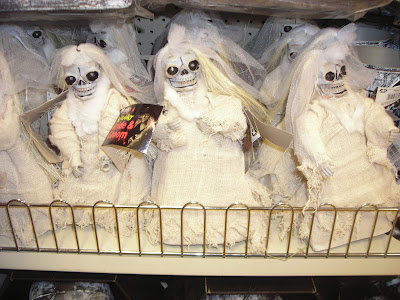 What's this all about? Gothic things, of course!

You might want to buy these items for Valentine's Day or Halloween , but they can be used all-year-round


I'm going to show you a few Gothic posters, some jewelry,  and cards  all featuring skulls and/or hearts. There are also lots of Ghoulish pictures to keep your attention

Spiral Assassin - Buy This on Allposters

A Skull and Heart Poster


Buy This at Allposters.com

See Below for My Zazzle Skull Designs - I've done quite a few:

My Zazzle Skeleton and Skull Designs - Is there anything you like?

You Can Get this Skeleton Design on an Apron, Card, or iPad Cover, on Zazzle. You can even insert your own wording, or choose the colour and style of your items. Zazzle is just such a pleasure to play about with:

And this Skull design comes on a T-shirt, card or mug:

What do you think of the Gothic Hearts and Skulls fashion trend? - Does it show disrespect for the dead? Is it an abuse of symbolism?

Lets see what you all thinkAfter all, we're all gonna die sometime!

How to Draw a Skull

How to Draw a Skull:

That's all for now, folks - don't forget to leave a comment below