Do you know what Mennonites are?

Somewhere at the top of Shepherds Hill in Highgate, London, there is an enormous old red brick Victorian manor house.  I had reason to go there to collect something, and discovered that it was the  Library of the London Mennonite Centre.  I was curious to find out what this organization was, as I had never heard of it.  I tried the usual Wiki search, but it was a bit too piecemeal for me so I tried another website, gotquestions.org, which seems to be a website about all things biblical. I have summarised what they say :

"Question: "Who are the Mennonites and what are their beliefs?


Answer: The Mennonites are a group of Anabaptist (opposed to infant baptism) denominations      named after and influenced by the teachings and tradition of Menno Simons (1496-1561). They are  committed to nonviolence, nonresistance, and pacifism. 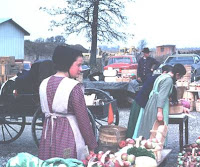 "Mennonite congregations worldwide embody the full scope of Mennonite practice from old-fashioned “plain” people to those who are indistinguishable in dress and appearance from the general population.

Early Mennonites in Europe were good farmers and were invited to take over poor soils and enrich them through hard work and good sense. Often the governing bodies would take back the land and force the Mennonites to move on since they would offer no resistance. So the migration to America started and they were welcomed by the Colonists.

There are many schisms, which actually started in Europe in the 1600s and continued after the immigration to America. Many of these churches were formed as a response to deep disagreements about theology, doctrine, and church discipline. Mennonite theology emphasizes the teachings of Jesus as recorded in the New Testament. Their core beliefs deriving from Anabaptist traditions are: the authority of Scripture and the Holy Spirit; salvation through conversion by the Spirit of God; believer’s baptism by sprinkling; discipline in the church (including shunning in some congregations); and the Lord’s Supper as a memorial rather than as a sacrament or Christian rite. 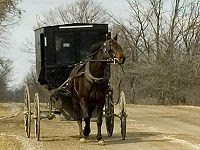 There is a wide scope of worship, doctrine and traditions among Mennonites today. Old Order Mennonites use horse and buggy for transportation and speak Pennsylvania Dutch (similar to German). They refuse to participate in politics and other so-called “sins of the world.” Most Old Order groups also school their children in church-operated schools. Conservative Mennonites maintain conservative dress but accept most other technology. They are not a unified group and are divided into various independent conferences. Moderate Mennonites differ very little from other conservative evangelical protestant congregations. There is no special form of dress and no restrictions on use of technology. They emphasize peace, community and service.

Another group of Mennonites have established their own colleges and universities and have taken a step away from strict Bible teaching. They ordain women pastors, embrace homosexual unions, and practice a liberal agenda, focusing on peace studies and social justice issues, good works and service to others.

There are many varieties of Mennonites. Some  are more evangelical than others; some are focused on Bible study and prayer; others re carefully maintain the works-based tradition set out by their ancestors; and, some  have left the faith of their fathers and focus instead on current social issues."