If you love beefburgers, you'll love this recipe. Because the beefburgers are home-made, you can control what goes into them, and make sure they are nutritious as well as tasty. using good quality mince meat - much nicer than anything you can buy.

This recipe is very easy, and therefore suitable for beginners, and more seasoned cooks will find it very simple and quick. There is also a Poll to entertain you and lots of pictures, as well as a few things to buy

See this Amp at http://amplify.com/u/a1dowd
Or go direct to Beefburgers - Quick and Easy Recipe
Posted by Unknown at 00:32:00

Borscht is a popular Eastern European and Jewish dish, made with seasonal beetroots, which makes it very cheap, as well as being nutritious. It makes a good vegetarian meal, as no meat is used, and it is so easy to make, because there are very few ingredients - just beetroot, lemon, salt, sugar, egg yolk and either yogurt, cream, or milk.

There are many different ways to make borscht, and this recipe is the way my mother used to make it.

See this Amp at http://amplify.com/u/a1cuwz
Also on HubPages - How to Make Beetroot Soup or Borscht 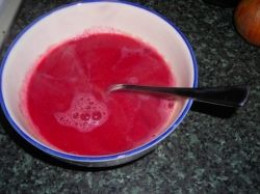 "London, My London" has just earned a Purple Star!

I wrote this web page London my London on Squidoo to show off some of my many photos of London, the most wonderful city in the world. It's full of open spaces, trees, and internationally famous sights, such as Big Ben and the British Museum, but it also has little nooks and crannies which yield their pleasant surprises when least expected.

There are small museums which were simply the personal collection of one wealthy person, such as the Sir John Soane Museum, and the Hunterian Museum, which holds a very interesting medical collection within the Royal College of Surgeons (where I worked for a few months). I will shortly be writing a further web page on London, indeed a series in time for visitors to check out before the 2012 Olympic Games. So look out for more of the same.

I have also been wondering whether there would be any call for people wanting to rent a room with a family in London for a few days during the Games - I know lots of Londoners who would be happy to oblige, if you don't mind being in a suburb a little way from the centre, with something a lot less than luxury, but homely and welcoming nonetheless. Let me know if you think I should maybe do a short web page about that.
See this Amp at http://amplify.com/u/a1cth2
Posted by Unknown at 22:04:00

Elvis Jailhouse Rock
Buy This Allposters.com
Let me take you through a snapshot view of the 1950's, a view skewed by the fact that I was not even a teenager in 1950, and by 1959 I was already a mother.
Too much happened in those post-war years to give you all the cultural, historical and political details, so these are just a few of my own musical memories which stood out.
It was the decade when Pop Music and Rock 'n Roll really took off but there was other good music too. And we played records on the gramaphone or radiogram.

In a large city like London, in many places where there are underground stations or busy main roads, you will find interlinked passageways.

When they are deserted, they can be very eerie, disturbing places, and you wouldn't want to linger there.

This is my poem about one such subway.

Quiz on Cats and Halloween

My Weird Collection for Halloween

What better time to display them than Halloween?
I've always had a fascination for arts and crafts, fantasy and oddities - I was considered to be mildly ghoulish when I was a child and my taste has developed rather than receded.
I must be a weirdo myself to have gathered round me such an odd collection and I'm going to show you some of the best ones. If you think they are a bit eerie, blame the craftsmen, not me! But one way or another, you must admit they are very collectable.

There's also a Poll and a Quiz about arts and crafts.
See this Amp at http://amplify.com/u/a1civf
Posted by Unknown at 08:04:00

Halloween poem about the lovely and desirable Pumpkin Pie

You will also find here a popular nursery rhyme, "Peter, Peter, Pumpkin Eater", and some blogs

A Grinning Carved Pumpkin - Warm and comforting but by no means ordinary.

That toothy grin, those staring eyes all lit up by a candle.

My Weird Collection - for Halloween

I've always had a fascination for oddities - I was considered to be mildly ghoulish when I was a child and my taste has developed rather than receded.

I must be a weirdo myself to have gathered round me such
an odd collection of weird masks, pictures, ornaments and figurines and I'm going to show you some of the best ones. If you think they are a bit eerie, blame the craftsmen, not me!

What Creepy Symbols do we Associate with Halloween?

Here are some appealing pictures of witches with and without pumpkins and cats, some ghosts, some lovely artwork, and definitely an atmosphere of Halloween and general ghostliness.
See this Amp at http://amplify.com/u/a1ci7h
Posted by Unknown at 22:27:00

There is artificial light everywhere, the night-time sky is tinged with yellow.

Sitting on a bus travelling through London, you can see in to people's windows, you get a fleeting glimpse of their life, but not enough to make sense of it.